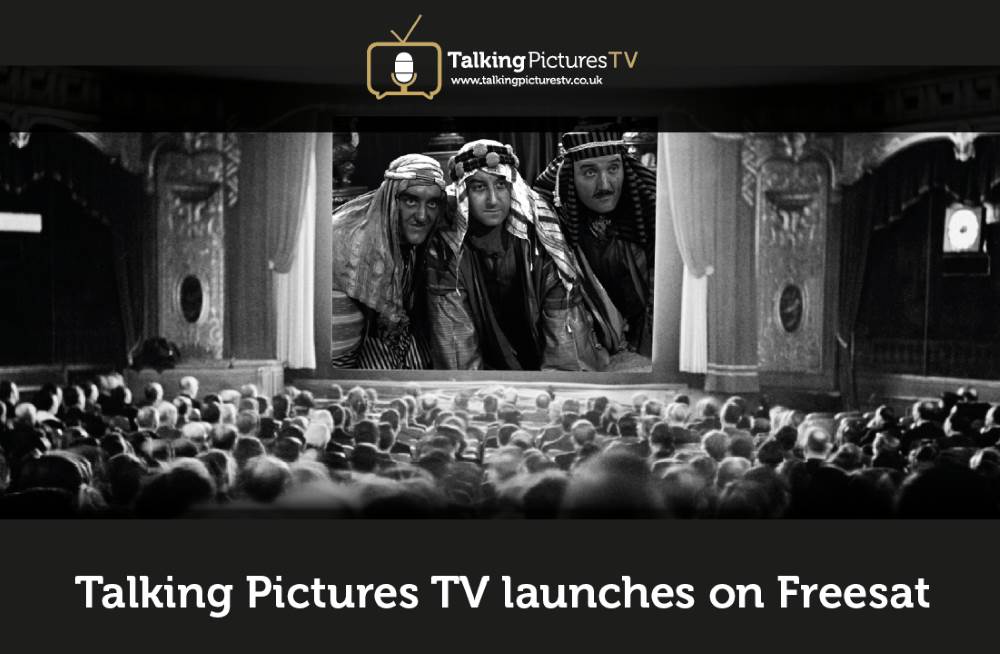 Talking Pictures is coming soon to Freesat 306, the subscription free satellite TV platform, following its successful launch on SKY 343 and Freeview 82. Do you remember the sheer joy and excitement of Saturday Morning Pictures? Where heroes and villains and clowns and crooners, invariably in glorious black & white, would entertain you for hours and hours. Now those glorious days return, and it’s not just for Saturday mornings. It’s twenty four hours a day. Every day! Whether it’s westerns or weepies, comedies or creepies, Talking Pictures Television has it all. So, grab your bag of popcorn and your drink on a stick, take your seat in the one-and-nines, and re-live some of the rarest and greatest gems from Film history…

Whether it’s Bill Travers battling the monstrous ‘Gorgo’, dogged Brighton policeman Jack Warner hot on the heels of a murderer in ‘Jigsaw’, or the touching romance of Michael Denison and Dulcie Gray in ‘The Glass Mountain’,. Along with some rare obscurities from British Film History and ‘early treats’ from the 1930’s , Talking Pictures TV brings you great classics, such as Brighton Rock, I’m Alright Jack, the Two Way Stretch, The Bargee and many, many more. Its the very best of British fi lm, 24/7. There’s also a tinsel town fi x with wonderful and rarely broadcast classics from the Hollywood television archives; resurrecting such popular, long unseen favourites as ‘Burke’s Law’ and ‘The June Allyson Show’. Simply settle back to some of the funniest, most thrilling, and just plain entertaining television available, anywhere. It’s all at the touch of a button. Whatever time you want it!
2 Facebook Twitter

Having recently replaced my Freesat box by investing in a BT box, partially to receive the full Freeview and in particular Talking Pictures, I am pleased that those viewers with Freesat will now be able to appreciate the wide range of British movies that are available. Many of these films may be ‘B’ movies, but can certainly be most entertaining and, from an historical viewpoint, of great interest. Many thanks to Talking Pictures and Renown Pictures for reminding us, not only of the days of Saturday Morning Pictures, but also the evenings spent at the cinema when we would watch an hour long film before the main feature, plus newsreel, cartoon and travelogue or documentary in between. It would be pleasing to see Pathé Newsreels and Look At Life or British Transport shorts from time to time on Talking Pictures, to complete our cinematic experience! I appreciate that this may not be possible, due to red tape, but thank Noel, daughter Sarah and all those who have opened this window on earlier decades of British cinema.

Many thanks for your comments and encouragement David 🙂

When will get the your programe list in Radio Times?.

When will your listings be in Radio Times

This is going to be film heaven for me and I wish all at Talking Pictures all the best for the freesat launch.

Great news that Talking Pictures is launching on Freesat. I have had big problems watching the channel on Freeview as I cannot pick up the tuning channel 33 very well, which was very frustrating when watching a great Stanley Baker thriller about 3 guys planning to rob an army base, A Prize of Arms I think it was called. Anyway, well done for setting up a channel which is filling a gap in the market, not just for us older cinefiles but for the young as well, who can indulge themselves in the weird and wonderful world of vintage cinema.

I’m enjoying the new tv channel very much, I came across it by accident, and since then am addicted. Having Sky I have often trawled channels thinking ” with all this choice there is nothing on I want to see!” Now, I can be sure that this will not be the case. Most of the movies came out when before I was born, or when I was 2 or 3, but the type of film got reshown on tv in Sunday afternoons, and me and my grannie used to watch them in the sixties. The films take me back to those comforting days. Congratulations – this channel is a wonderful antidote to churned out rubbish with faded “celebrities” eating worms or disporting themselves in various ways to provide what is called entertainment. I hope you continue to show lovely 50s films for a long time.

Rebecca
You echo my sentiments exactly! I too grew up watching these vintage films on tv and still love them.
Pauline

Absolutely fabulous, great to see the classic and the good again. Really enjoying the BFI documentaries, ah the good old days, please please keep it up…….

Loving TPTV on Freesat. It takes something pretty special to pull me away from Radio 4 Extra, but those British dramas, comedies and thrillers from the 40s-60s that I’ve been glued to each evening recently have done it! And the bonus highlight of Southern TV’s ‘Together’ by Barbara Clegg, one of the writers on the old BBC daily drama Waggoners Walk. I’m only just out of my forties so don’t consider myself an old codger but really love the older films, radio and tv . Thank you so much for a briliant station.