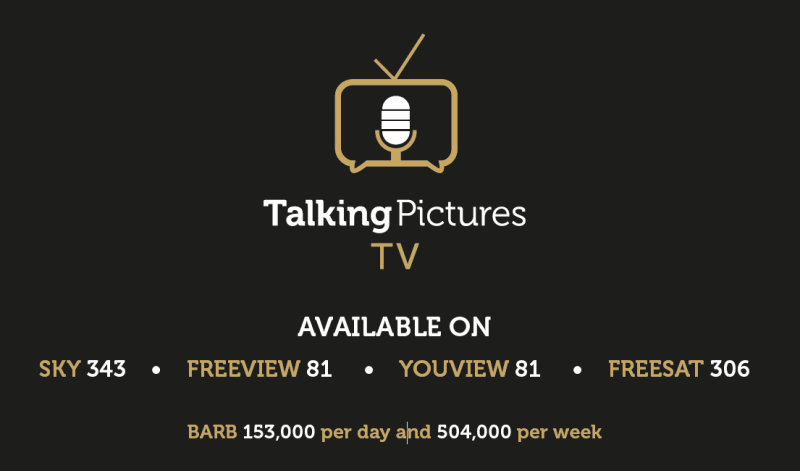 Highlights for Week Monday 23rd May 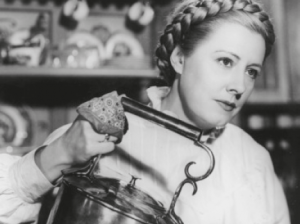 Monday 23rd May 14:35 I Remember Mama 1948 Starring: Irene Dunne, Barbara Bel Geddes, Oskar Homolka Norwegian immigrant Marta Hanson (Irene Dunne) keeps a firm but loving hand on her household of four children, a devoted husband (Philip Dorn) and a highlyeducated lodger (Cedric Hardwicke) who reads Charles Dickens to the family every evening. Through financial crises, illnesses and the small triumphs of everyday life, Marta maintains her optimism and sense of humour, traits she passes on to her aspiring-author daughter, Katrin (Barbara Bel Geddes). 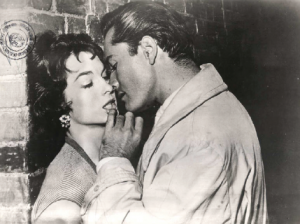 Monday 23rd May 22:35 The Flesh Is Weak 1957 Director: Don Chaffey Starring: John Derek, Milly Vitale, Shirley-Anne Field & William Franklyn Giani is a pimp who preys on the naive, ‘just off the bus’ young women who come to post-war London for fortune. A tale of prostitution in 50s Soho, London. Centred here around a band of Italian brothers who are the bad ones and indeed the Italians probably did play a large part in the scene at that time. The film is well shot and the dialogue is good. There are fine performances from all and the movie is believable and interesting. 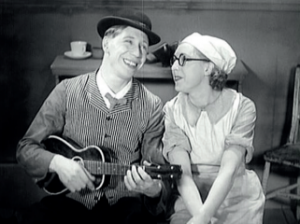 Tuesday 24th May 17:30 Boots! Boots! Starring: George Formby, Beryl Formby, Arthur Kingsley George plays John Willie, the shoeshine boy at the upmarket Crestonian Hotel. He’s a cheeky little man with no time for authority, a head full of dreams, a pocketful of songs and a heart full of love for the hotel’s scullery maid (Beryl Formby). After causing more than his fair share of chaos at the hotel, he finally gets the chance to redeem himself - and show off his hidden musical talents - when he finds himself topping the bill at the hotel’s Gala Cabaret Night. Songs include: ‘Why Don’t Women Like Me?’, ‘Sitting on the Ice in the Ice Rink’ and ‘I Could Make a Good Living at That’. 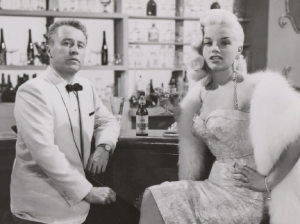 Wednesday 25th May 12:35 I Married A Woman 1958 Starring: George Gobel, Diana Dors, John Wayne In New York City, good-natured advertising executive Marshall “Mickey” Briggs drops off his young wife Janice downtown, but is too distracted to notice that she heads for her obstetrician’s office. At his office, Mickey learns from his malapropism-spewing secretary, Miss Anderson, that agency director Mr. Sutton needs to see him right away. Sutton soon reveals that they are in danger of losing the company’s most important account, Luxemberg beer, because the owner’s wife no longer appreciates the long-running campaign featuring gorgeous “Miss Luxemberg” models. After instructing Mickey that the future of the company lays in his hands, Sutton gives him only two days to come up with a new campaign. 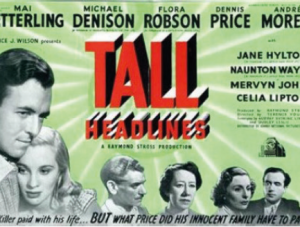 Thursday 26th May 20:05 Tall Headlines Director: Terence Young Starring: André Morell, Flora Robson & Michael Denison A family struggles after the eldest son is convicted and hanged for murder. Also stars Mai Zetterling. When their eldest son is hanged for the murder of a young girl, George and Mary Rackham (Andre Morell and Flora Robson) try to erase the memory – and the unwanted attention of the neighbours – by moving away from their home and changing the family name to Blake. But their children, Philip (Michael Dennison) and Frankie (Jane Hylton), struggle to adapt to normal family life without their executed brother. 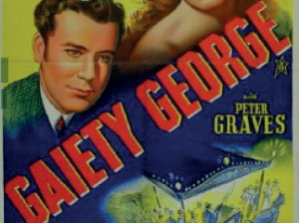 Thursday 26th May 21:55 Gaiety George Starring: Richard Greene, Ann Todd, Peter Graves Musical comedy charting the life of theatre impresario George Edwardes -THE ORIGINAL ANDREW LLOYD WEBBER. Features the first ever film appearance by future James Bond; Roger Moore. The dashing entrepreneur buys a run-down music hall in the capital and fills it with musical comedies, much to the delight of his audiences. But after George marries a beautiful young chorus girl, played by Ann Todd (The Seventh Veil, The Fiend), a vindictive theatre critic (Peter Graves) attempts to destroy his career.

Friday 27th May POP GOES THE MOVIES DAY! A whole day celebrating Pop Stars In Film and Films With A Beat. 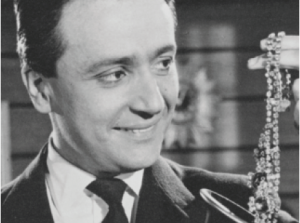 Friday 27th May 12:30 Band Of Thieves 1962 Starring: Acker Bilk, Jimmy Thompson, Jennifer Jayne One of the truly great Trad’ Jazz films of all time. A jolly musical romp with some cool jokes thrown in, featuring Acker Bilk and his trad jazz band. He plays a reformed petty criminal who hits the big time, but gets tempted into some extra-musical activity at some of the stately homes at which he plays.

Friday 27th May 16:00 Every Day’s A Holiday 1965 Director: James Hill Starring: John Leyton, Mike Sarne, Freddie and the Dreamers A British holiday camp is sending out replies to those who have applied for a summer job working there, telling the select few they have secured a position with them. Among those successful applicants is Gerry Pullman, who dreams of being a pop singer-songwriter but cannot get this career off the ground. Today he is wistfully gazing into his bedroom mirror and crooning, imagining himself to be Frank Sinatra or Nat King Cole, when his father (Michael Ripper) calls him down for tea and tells him once again how he’ll never amount to anything in his chosen field. But he might be wrong about that, what with the camp’s talent show coming up. 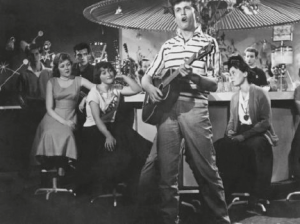 Friday 27th May 18:20 The Golden Disc 1958 Starring: Lee Patterson, Mary Steele, Terry Dene & Linda Gray A young pop composer and singer opens a coffee bar. They are joined by budding singer Terry Dene as himself. A very cool look at the 1950s British coffee bar scene and the first screen appearance of singing sensation Terry Dene! Two teenagers, with the help their Aunt, open a coffee bar called the “Lucky Charm.” All the cool kids listen to the jukebox then go to the record store to buy the records. The Aunt decides to sell records at the coffee bar. Genius! Then she decides to find talent start a record label! Cool Aunt! But as their acts begin to score in the charts, a rival record company tries to muscle in on their action. 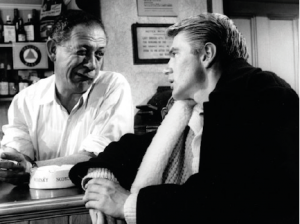 Friday 27th May 21:55 What A Whopper 1961 Director: Gilbert Gunn Starring: Adam Faith, Sidney James, Carole Lesley It treats the subject of the Loch Ness Monster in a tongue-in-cheek fashion and stars the pop star Adam Faith as one of a group of Englishmen who travel to Loch Ness to fake sightings of the monster.The cast includes a number of leading British film actors, including Wilfrid Brambell as a local postman, Sid James, Charles Hawtrey and Terry Scott. The TV reporter Fyfe Robertson appears briefly as himself, covering the alleged sightings of the monster. 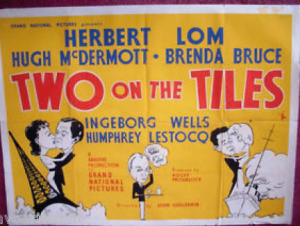 Saturday 28th May 17:35 Two on the Tiles 1951 Director: John Guillermin Starring: Herbert Lom, Hugh McDermott, Brenda Bruce John Guillermin had just started his career a a British director when he made this trifling B picture, from a neat screenplay by Alec Coppel who wrote scripts for many major films and was Oscar-nominated for the Alec Guinness hit ‘The Captain’s Paradise’. Their star, Herbert Lom, a refugees from Czechoslovakia (who played Napoleon twice in his long career and the psychiatrist in the sensational ‘The Seventh Veil’) was here a suave butler who, with his seductive wife Ingeborg Wells (later, I believe, a Hammer Horror star), tries a spot of blackmail on erring couple Hugh McDermott and Brenda Bruce. Canadian McDermott is somewhat OTT, and Bruce, a gifted comedienne, isn’t quite glamorous enough, but the film (a bit risqué for 1951!) is rather good fun and doesn’t outstay its welcome. Some of the action must have been on a liner (I last saw the film in the year of its release!) because children’s TV favourite Humphrey Lestocq is cast as a purser. 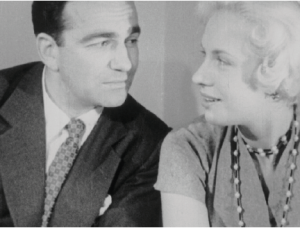 Sunday 29th May 12:00 Flight from Vienna 1956 Director: Denis Kavanagh Starring: John Bentley, Theodore Bikel, Donald Gray When Kosice (Theodore Bikel) a high-ranking Hungarian official, asks for asylum in the west, he finds himself forced to go back to Hungary to bring out a scientist to prove his sincerity. The hazardous mission is accomplished and Kosice flown to London, where an attempt on his life is foiled. Convincing drama with good performances (Quinlans)

I watched the Bargee the other day with Harry H Corbett and Ronnie Barker and I loved it. I was telling a family member about it I saw it was on this morning too late (3rd Jun) I cant find any more showings in the guide, wont it be on again?