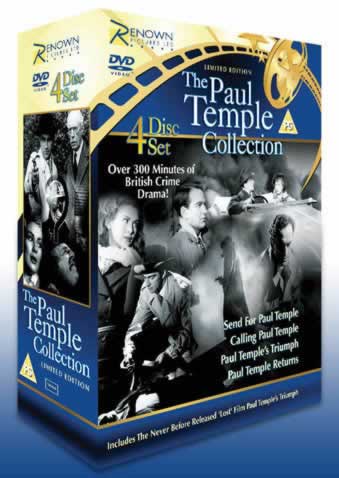 Win The Paul Temple Collection 4 DVD Boxset in celebration of the launch of Talking Pictures TV.

To win a brand new limited edition Paul Temple box set, courtesy of our friends at Renown Pictures Ltd, please like and share our Facebook page and tell us which actor is your favourite Paul Temple and why.. The winner will be drawn at random on launch day, Tuesday May 26th 2015 and the competition closes midnight Monday 25th May 2015.

DVD One - Send For Paul Temple Scotland Yard calls in novelist and amateur detective Paul Temple (Anthony Hulme) to help track down a gang of diamond robbers. In the course of his investigations he meets Steve (Joy Shelton), a girl reporter, whose detective brother has been killed by the gang and they join forces to unmask the gang Leader. However did Scotland Yard manage without Paul Temple... Directed by John Argyle Starring Anthony Hulme Joy Shelton Tamara Desni DVD Two - Paul Temple’s Triumph Paul Temple (Bentley) and his wife Steve (Sheridan) are on the hunt for a kidnapped scientist whose secret formula for atomic weaponry has fallen into enemy hands. He is located at the headquarters of "Z," a malevolent underground organization. Directed by Maclean Rogers Starring John Bentley Dinah Sheridan Barbara Couper DVD Three - Calling Paul Temple Scotland Yard is unable to unravel the "Rex" murders. An unidentified killer who signs his name as "Rex" has slain three wealthy women as they rode in trains. All of the victims carried pieces of paper on which was written the name "Mrs. Trevellyan." Temple is called to assist the investigation. Directed by Maclean Rogers Starring John Bentley Dinah Sheridan Alan Wheatley DVD Four - Paul Temple Returns (Aka Bombay Waterfront) The plot revolves around Temple’s efforts to aid the police in solving a series of gruesome murders, and leaves us with the inevitable feeling of ‘However could Scotland Yard have managed without him....’ Directed by Maclean Rogers Starring John Bentley Patricia Dainton Peter Gawthorne DVD Box Set Running Time: 5hrs 18mins approx Black & White Format: 4:3 Region: 0 Sound: Dual Mono Encryption: CSS
0 Facebook Twitter